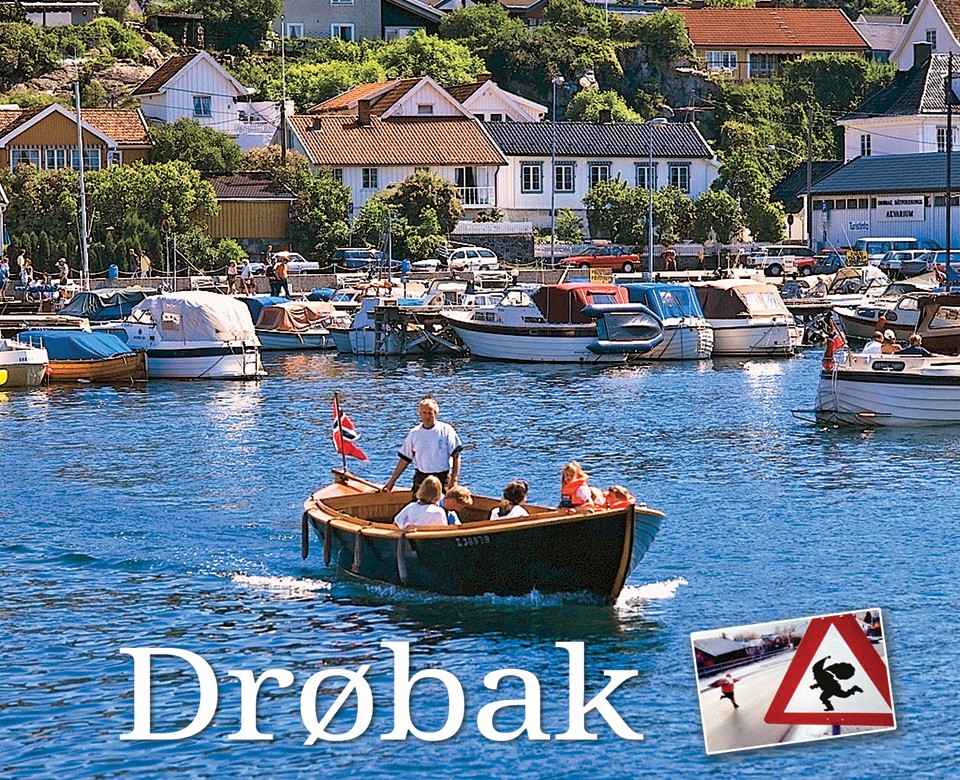 The waterfront on a sunny summer day (photo by Tom-Erik Mjøen). But you may also meet Santa Claus in Drøbak … 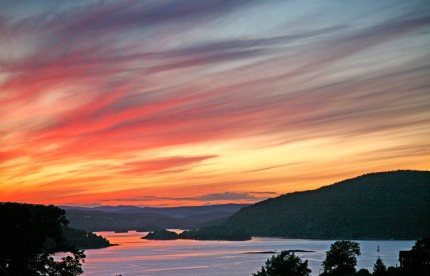 Sunset in the inner Oslo Fjord seen from Drøbak. 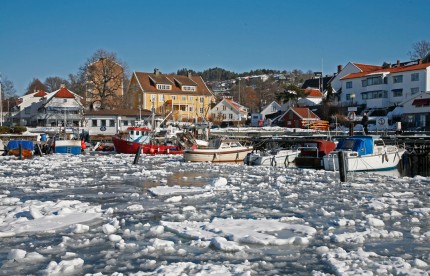 Winter in Drøbak Harbour with the floating ice from the Oslo Fjord.

The town square of Drøbak on 17th of May, Norway’s national day. 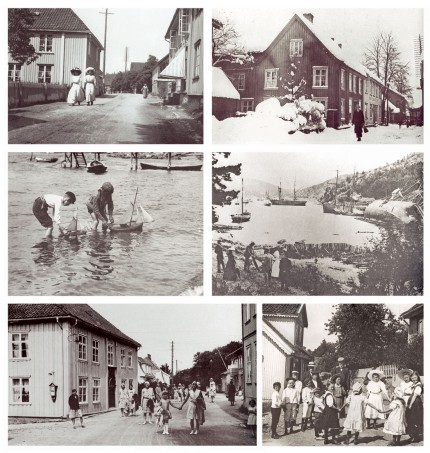 A small selection of historical motives contributed by the Society for the Protection of Old Drøbak.

The town where the sun never sets

Let us introduce our little town with a big smile because Drøbak is also famous for its spectacular sunsets. Here you can relax beside the blue waters of the Oslo Fjord in an outdoor restaurant or in a boat in the harbour, and lift a glass towards the sun as it sets behind the forest clad hills in the west. Experience the white sails, the smell of the salt water and the gentle evening breeze. And maybe the chug of a fishing boat arriving with the day’s catch of mackerel. Dream a little – as this is a typical Drøbak summer atmosphere.

But, winter can also offer a special atmosphere with the frost smoke over the icy fjord waters, this time framed by the snow covered landscape. Illuminated passenger ferries and cargo ships slide by, so close you feel you can reach out and touch them. Beyond, the lighthouses and the floodlit Oscarsborg Fortress give a special atmosphere in the crisp winter darkness. This is the home of Santa Claus and his spirit hangs over the water, the forests and the little town. Let us dream of days gone by, fun and adventure!

A short history of Drøbak

In the years between 1700 and 1800 Drøbak grew as the sail ship industry established itself in the area. Here the ships loaded their cargo of ice blocks and timber and returned with grain and industrial products for the whole of the Oslo area, as Drøbak was the winter port for the capital city. In the winter months the inner Oslo Fjord froze, preventing the ships from sailing into Christiania as it was called until 1925 – when the capital was renamed “Oslo”. Many of the ships laid up in the harbours in and around Drøbak in these winter months. Cargo coming in was transferred onto horse drawn sledges. In 1814 it became the Customs Centre for Oslo.

The name Drøbak comes from the description of the surrounding hills as they rise, rolling away from the coastline; «Drøye bakker» in Norwegian. In 1962 it was absorbed into the Akershus County and became a municipality and the administrative centre for the area with a population of about 1000.

The cluster of small wooden houses grew as the fishermen, sailors and tradesmen built their homes from the available materials. Today these little houses – many from the 1700s, sur-rounding the small boat harbour – are attractive treasures. They are zealously protected by the local Society for the Protection and Restoration of Historical Buildings. Drøbak’s history is in many ways an example of Norwegian History in a nutshell. Today’s prosperity is built on a foundation of those early years of poverty and hardship and simple drudgery. In 1962 Drøbak and the neighbouring farming county of Frogn merged, and today Drøbak is the county centre with a population of 15,000. Many of the county headquarters have their offices in some of the classical buildings we are so proud of. The local development is always watched over by the Society for the protection of Old Drøbak and buildings are beautifully maintained for our pleasure. On the society’s website you can take an illustrated historical tour around Drøbak in either English, German, Italian or Norwegian.

Drøbak as a Seaside Resort
and Artist Colony

Norway’s capital grew rapidly in the 1800s and many of the prosperous citizens began to look to Drøbak as an ideal seaside resort during the summer months. Steamboats landed the visitors in Drøbak, and their stay in the hotels and guesthouses lead to a growing local business. Drøbak’s close vicinity to the sea became again a source for development and income as it developed into a seaside resort with a spa and warm pools built in the Seaside Park near the town centre. Today’s Drøbak is still a popular swimming area with beaches, diving areas and the sloping rock faces for sunbathing. All for free!

Swimming in Drøbak early in the 1900s. The artist Christian Krohg, one of the Drøbak Painters seen here at work with his son Per as his assistant.

Over the years many famous Norwegian artists and writers have drawn inspiration from Drøbak during visits to the area. Among these are the winner of the Nobel Prize in literature, Knut Hamsun, and poet Herman Wildenvey. Also to be mentioned are well known painters like Kristian Krogh, brothers Bergslien, Hans Fredrik Gude and Edvard Diriks – Edvard Munch’s cousin. In more modern times the artist Ferdinand Finne is probably the most famous. His saying “you will find your way as you wander along”, can easily be imagined as you explore Drøbak.

Oscarsborg lies today as a illuminated monument in the Drøbak Sound. Also on the land side of the sound there are remnants of the old fortress, here depicting a Canon Shift in 1909. 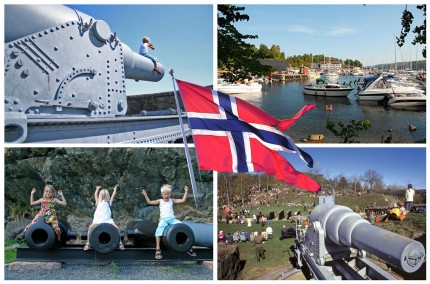 Drøbak has always had close connections to Oscarsborg Fortress in the middle of the sound. This is where the fjord is at its narrowest point and already in 1643-45 a stronghold was built here. At the end of the 1800s an extensive expansion took place, and in 1905 when the union with Sweden ended, the Fortress was considered to be the strongest of Norway’s military defences. The two neighbouring countries were actually at the brink of war at that time. Ironically it might be worth mentioning that much of the fortress had been built by Swedish stone masons.

On 9th April 1940 the fortress showed its true value as Nazi-Germany launched their surprise attack on Norway. An unprepared and untrained garrison managed to sink the German battleship “Blücher” as it sailed past in the early morning on its way to invade Oslo. The ship was fired on by the canons «Aron» and «Josva» on the orders of Colonel Birger Eriksen who after the war was awarded for his achievements. The canons were previously delivered by German arms industry, so the intruders now tasted their own steel. Along with torpedoes the old cannons proved effective as the burning ship went down near Askholmene northeast of Oscarsborg. The Germans had their key army personel on board of “Blücher”. The loss of 900 men and the ship was disastrous. The hit gave The Norwegian Royal Family, members of parliament and ruling government time to evacuate from Oslo – together with the Nation’s gold reserves. This later made it possible for Norwegian authorities to lead the war efforts from London.

“Blücher” still lies at the bottom of the sound. In 1994–95 it was emptied for crude oil to prevent an eventual local environmental disaster. The ship’s anchors have been lifted and one lies in the Seaside Park in Drøbak centre beside a statue of Colonel Birger Eriksen. The other is displayed at Aker Brygge in Oslo.

Oscarsborg today has no longer any military function but it has a Commander. The split-end flag gives a signal of a military command. It has a huge defence museum inside and the guided tours are of great interest to visitors. There are also restaurants and a hotel. During the summer months the courtyard inside the walls is used for performing operas and concerts. Many people come out by ferry from Oslo or from the Drøbak side of the sound to attend these popular performances. 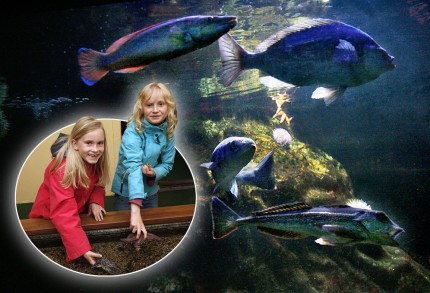 The Aquarium in Drøbak shows life in the fjord outside. A hands-on pool gives extra excitement to the young visitors.

Drøbak Akvarium – the Marine Biological Centre of the Oslo Fjord

This aquarium was built by the local boat society and holds a large number of different types of fish and shellfish that can be found in the Drøbak Strait. The intension has been to create a view of the environment and sea life in the fjord nearby and it has become the most visited attraction in the whole county. It is part of the marine biological research station attach-ed to the Oslo University. Many school groups visit the centre as well as families of all ages.

A rich selection of outdoor life and shops await the visitor in Drøbak.

• Accomodation: For those wanting to stay overnight contact the traditional Reenskaug Hotel, or for adventure, the Oscarsborg Hotel & Spa.

• Galleries and Museums: Drøbak is well known for its many small arts and crafts galleries. The town square most days has an active market with various stalls selling antiques and bric a brac.

• Christmas House: «Julehuset» near the town square celebrates Christmas all year round! It is here also that all the thousands of letters written every year to Santa Claus are collected.

• Kroketønna Boat Motor Museum: The local Boating Society has made a collection of various boat motors and other maritime curiosities for display. It is situated near the small boat harbour.

• Lutefisk Museum: This museum is unique being the only one in the whole world. It has a rather humouristic exhibition of one of Norway’s most special and traditional fish dishes. Lutefisk is made from stockfish of cod. The fish is soaked in an alkaline solution, well watered, then steamed and served. Normally accompanied by the Aquavit, a fiery Norwegian potato snaps! This dish is served in the October – December period in the Drøbak restaurants.

• Concerts, Revue Theatre and Blues Festival: During the summer months Drøbak arranges a variety of concerts and revues by local and other more well known artists. The Harbour Blues Festival takes place every July. A programme of these events can be found in the local Events Calendar or online.

• Cinema: The nightlife activity in Drøbak has increased here recently owing to the addition of a new digital system.

• Drøbak Church: For those interested in a quiet pause – make a turn into the venerable old wooden church built in 1776. It is situated near the entrance to the Seaside Park and is open several days of the week in summer.

• Shopping: In the centre of town there are a lot of different and interesting types of stores to browse: Shoes, clothes for all ages, bakeries, supermarket, flower shops, toy stores, car service and pharmacy to name a few. All of these are within walking distance from the car park in the centre of town. The local library and post office are also centrally located.

• Drøbak City: This is a large shopping mall on outskirts of Drøbak and is a short car drive away. A large supermarket and a variety of speciality shops offer more temptations.

• Golf: For the golf enthusiasts there is a pleasant 19 hole course, and is situated near the mall.

Fresh shrimps in the harbour

The small boat harbour with its moored pleasure and small fishing boats can offer an ideal oasis for those who want to relax with a glass of refreshments or maybe a fishing rod. It also offers the sale of fresh shrimps and local fish straight from the boats! The Drøbak Sound is known to be one of the best fishing places in the fjord, so get yourself a fishing rod and make a tour to one of the many piers and sloping rocks along the shoreline. Fishing in the ocean is free in Norway – no fees!

By the boat harbour there is an information centre co-located with the Aquarium. Here you can get a town map and other help or information. Wherever you come from in the world we are sure Drøbak will give you a visit to remember. It is easy to get here – just 40 minutes by bus from Oslo. Summertime a boat service between Oslo and Drøbak is also available. 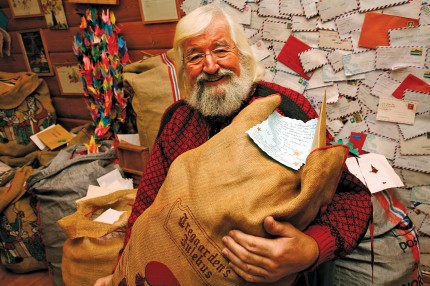 Santa Claus receives over 20.000 letters every year from all over the world.